Being on tour with good friends is awesome. We managed to do a small round with our old buddies from Razgruha and our new buddies from Indoctrinate. We played 4 cities in Greece and 1 show in Plovdiv.

Our first gig took place in the squat in Xanthi w/Chilean bands Anti Tanax & Perro Suicida. Great guys! We played outside and had a great crowd. Thanks to Ef & Kids From the Black Hole for this opportunity! I didn’t take any pictures on film that night, as it was already too dark before I thought about it. Anyway, here’s a picture from that show. 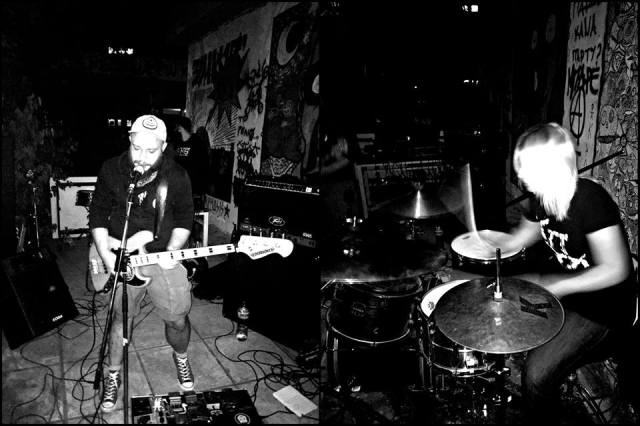 We went to Karditsa next, where we met Indoctrinate from Vienna for the first time. Karditsa has a special place in our hearts after we player Tera Troira last year. It’s amazing to see active DIY music scene in such a small city and we were glad to meet Christos and other cool guys from there. The gig took place right outside the squat and it felt really cozy. 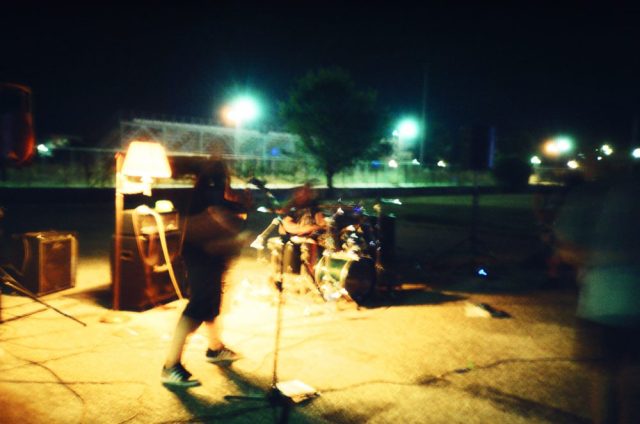 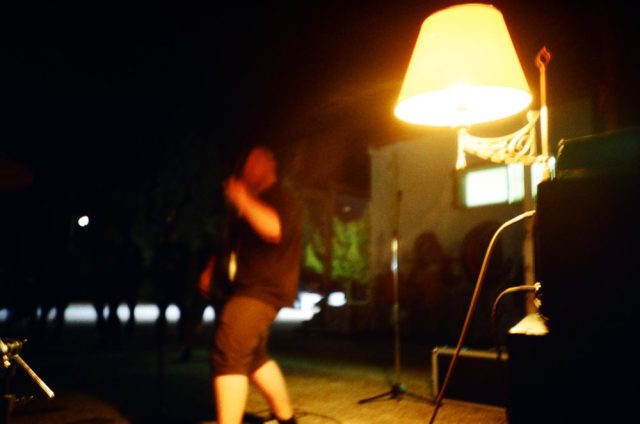 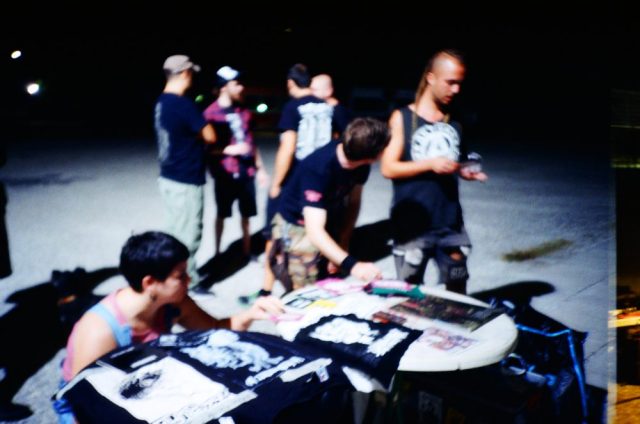 We spent the night in the squat talking shit, snoring and fighting some enormous local bugs. 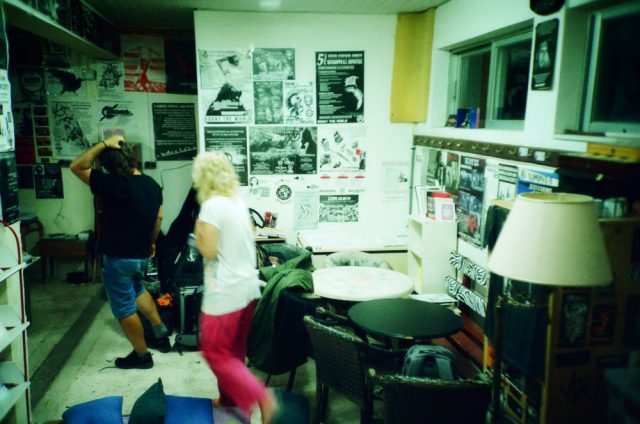 Next morning we had plenty of time to have some coffee and fool around before heading to Athens. 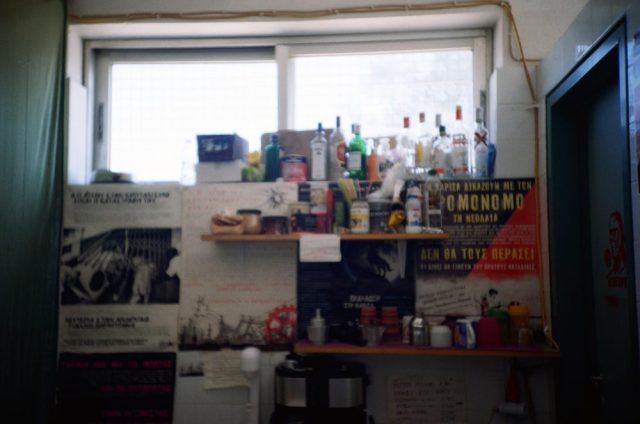 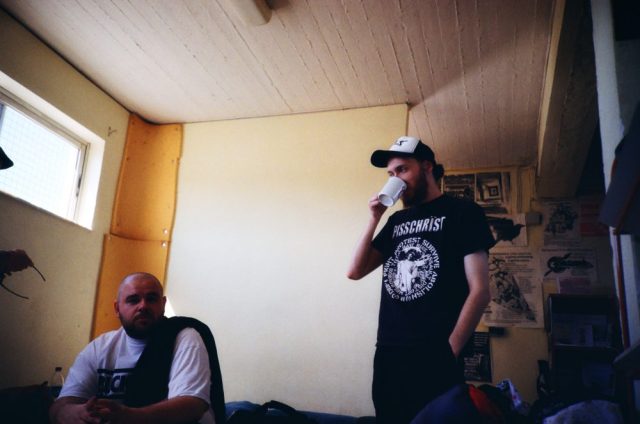 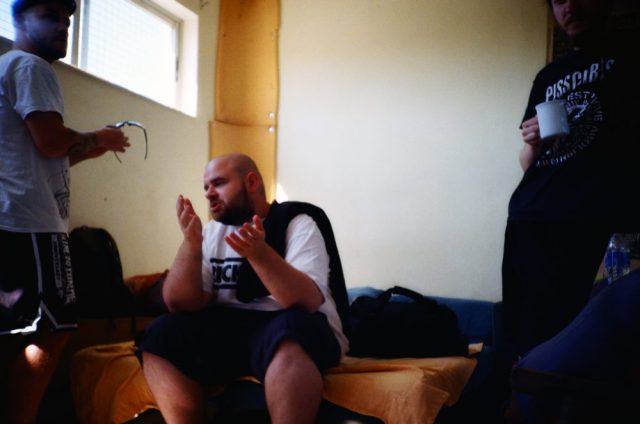 We arrived in Athens following a nice 3-hour drive. Our venue for the night was Black Box Studio where they have an actual studio, a place for small gigs and an amazing rooftop with a view. The gig turned out great, we had a great sound and lots of friends came by. All in all, it was about time we play an Athens show and we are certain this won’t be our last time there. 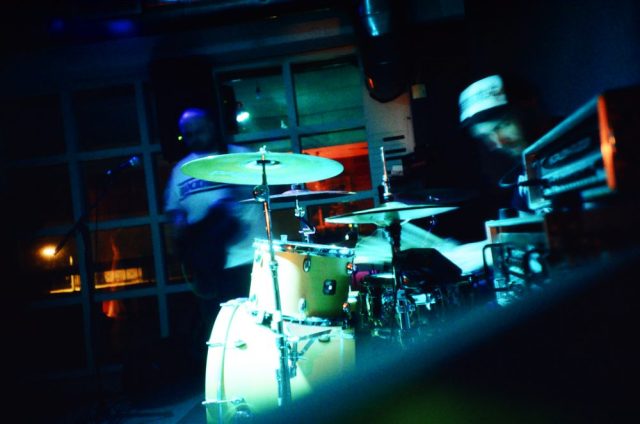 Mike from Friend of Gods was our host for the night, thank you for letting 10 weirdos shit in your house, mate! And thank you for the great coffee! 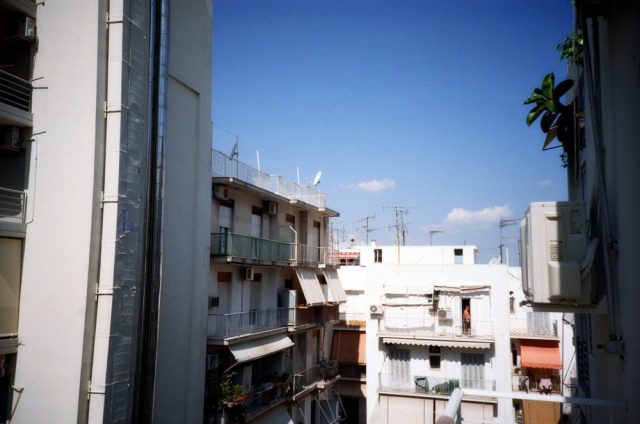 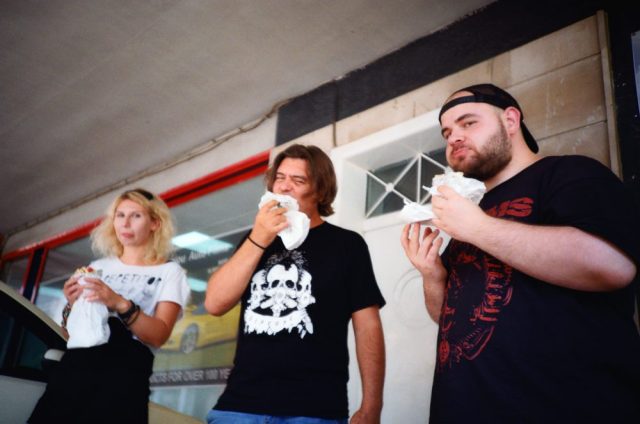 Next gig was in Larissa, but I was kinda tired and pissed off so I don’t think I bothered to get my camera out. We were glad to be back at Antidrastirio Squat and Studio Spirtokouto for the second time this year. The guys from the squat were very kind to us, and it’s great to see their passion for DIY music.

We had a long drive to Plovdiv the next day, and were this close to being too late for the show. Somehow we managed to arrive, set our shit like super fast and play what turned out to be the most crowded gig on this tour. A great atmosphere, amazing crowd and lots of old and new friends. This was a Prix libre show, like all the rest on this tour, but this is still not very popular in Bulgaria, so we were glad to see this as a total success for both the venue & us. Thanks to Nikola & ФОН for making this happen! 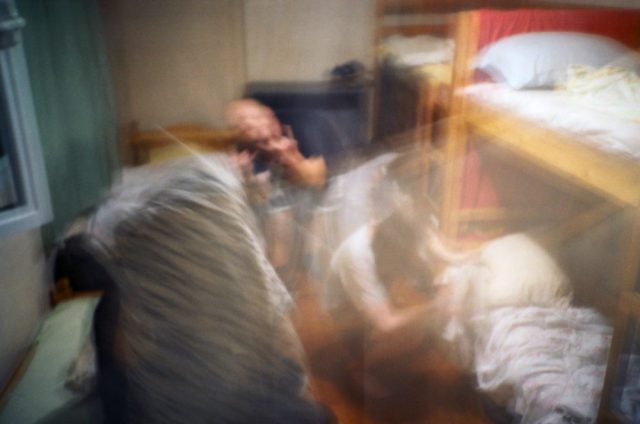 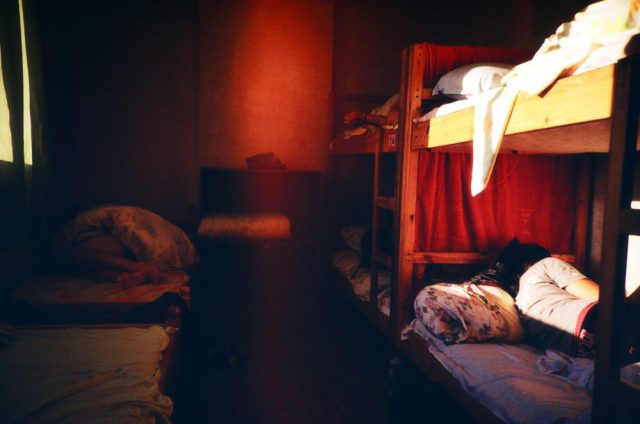 The coffee at the hostel sucked, but they had a nice terrace where we met some Belgian travelers and a nice guy from Prague.

Packing our stuff and going home. 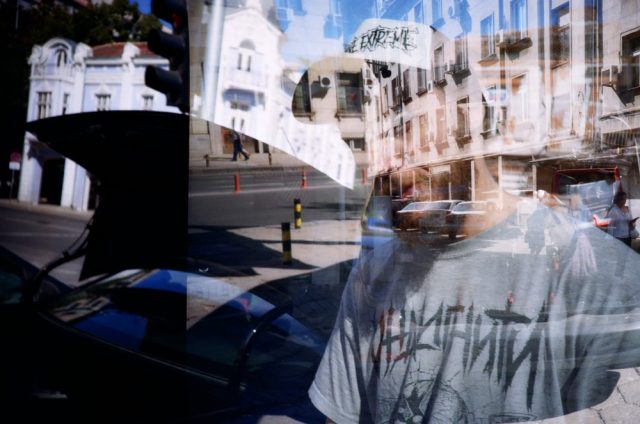 This was a great experience and we had loads of fun playing these shows. Thanks to all involved – you know who you are. We love you!

We can hardly wait to play Greece again, but now it’s time for our next big thing – our first bigger tour in Europe with Calf.

P.S. *All pictures (except the first one in Xanthi) shot on my trusty old Lomo LC-A camera

Long story short, we’re in the studio again, and by “in the studio” we mean our own rehearsal space we refer to as Wind City Studios.

Of course, Wind City is the brainchild of Mihail “Ballou” Slavov, top boy and guitar player in Expectations & King of Sorrow. He’s worked on our first recordings ever, so it was our first and comfiest choice to work with him again.

By far we’ve tracked drums and bass and this took us a total of 2 days. Working with a friend is fun, but it’s also easy when you try and act professional. We’re on to record vocals in the next few weeks and then this journey continues with the mixing process, which we decided to experiment with another recording mastermind (we’ll keep his name a secret for now).

Of course the best part of recording is being goofy & exhausted in the studio, so here’s a small video we made during days 1 & 2. 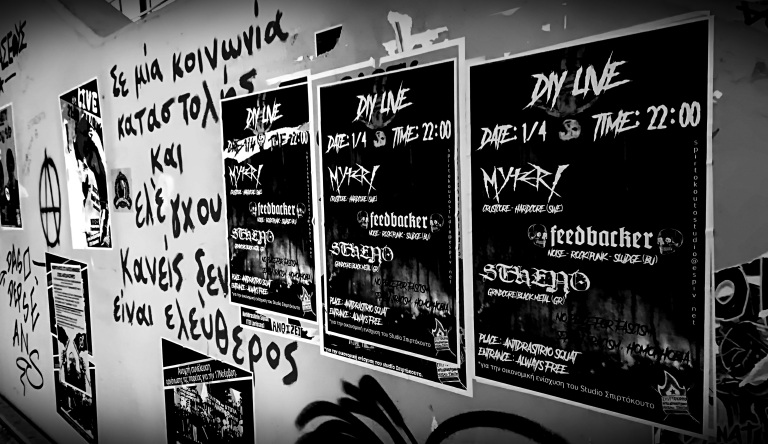 We’re just back from a two gig “tour” in Greece and still excited from reuniting with old friends and making new ones. So after two great local gigs in Plovdiv we finally brought out some of our new songs and started playing them live. We headed to Greece for some shows with friends from Plebah (feat. Stratos from Autumn Acid) & Living Under Drones (feat. top blokes from Calf). Thessaloniki delivered big time, as always.

This time we played what I believe is one of the oldest squats in the city – Biologica. Amazing place with a very tight collective running the venue. Thanks to Mixalis and Melina for the great reception and everything you did for us, much appreciated. 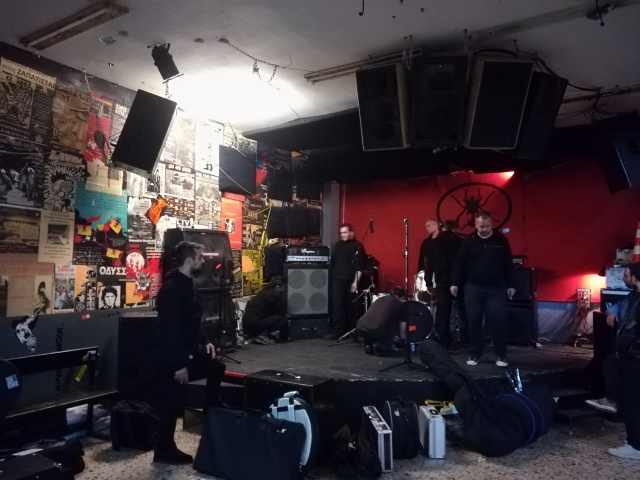 Thessaloniki felt like home, but better. Kickass bands in the noise rock/experimental territory. First time we met the guys from Burlot, which is a great two-piece – a band I’d love to see play Sofia as well.

We had great falafel, which has nothing to do with the falafel we get at home. It had feta cheese and potatoes, weird but also very tasty! Our bestie Koutroulis took us for some late night double espressos, which gave us some power to kick some ass on stage. Caffeine is one hell of a drug and here’s a selfie to prove it.

Shows in Greece start super late, so we were having our ears massaged by some of the hottest noise bands on this side of the map till like 5 AM. We were pretty tired, but still put a decent set. Take a look:

(Fuck! I just noticed the video is sideways!? What kind of fuckery is that? How do I fix this shit?!)

Giorgos from Autumn Acid & Anasarka was our host for the night, so it was great to be at a friend’s place for the night. We got some damn fine coffee & toast in the morning and went for a short walk before we took off to Larissa. The weather was perfect.

We had a chill drive to Larissa and got early in Antidrastirio Squat in TEI Larissas. Guys from the squat were very nice to us and showed us their DIY rehearsal studio in a great occupied autonomous place in the university. Pretty much a DIY heaven with lots of space and lots of cool people involved.

Stheno from Volos opened the show, and boy these guys sound tight! Amazing band if you’re into fast and unforgiving grind/metal. We played second to a compact crowd that seemed a bit puzzled by our thing, but also very supportive. I was pretty concerned that we’ll blow up the PA, since it was clipping real hard all of the time, but it managed to survive the show.

Myteri from Sweden played last and it was a fucking pleasure to see these guys do their thing. Absolute legends! They totally smashed it, despite the PA problems and had a great attitude. We chatted a bit and traded some records and of course, I bought like 10 patches from them, ’cause fuck yeah, patches!

After the show, another Giorgos was our host at NTOYГROY squat in the center of Larissa. Amazing occupied building that has been the crash pad to many DIY bands that visited this city in the past 2-3 years.

Now we’re back home looking forward to our show here with MAYPO GALA & Skinpin from Australia in May. We’re also finishing up a few new tracks for an upcoming release and looking to record them in the following months.

Hopefully, we’ll be back to Greece soon for another tour, this time longer. Keep the flame!

Just a day before our gig with Calf I was asked to make a podcast about the Greek DIY scene for our local webzine Lunatic.bg…

Since the beginning of Feedbacker life was good enough to meet us with many cool bands from Greece and we’ve always felt at home playing there. Greek DIY scene is a true inspiration and we’re constantly intrigued and fascinated by the efforts and results that our friends put in making it happen. The next hour of music presents some of the most important names in Greece at the moment, without claiming to be a complete list or something. My main goal was to put together some of my personal favourites, united by their activity in the independent, anti-authoritarian DIY scene in Greece and beyond.

What this means? In short, artists rely entirely on their own strengths and manage to make their own concerts, recordings, distribution, etc. happen through a network of friends and followers on the principle of DIY. What we saw during our visits in Greece is indeed a working network of self-organized spaces, social centers and squats that allow bands to make gigs and pass their messages through without relying on bars, clubs and ticket sales. Concerts in independent spaces in Greece are most often funded by free donation, meaning that everyone can visit the event, regardless of their material possibilities. What matters is personal responsibility and involvement of the participants (artists, listeners, organizers) instead of “stars” and “fans” divided by profit.

Hope you enjoy this selection!

Getting ready for our next attack. Sept. 8th 2017 (Friday) @ Grindhouse Skateclub

Our friends Calf from Greece are coming back in town, and it’s a pleasure to host them for a gig + some quality time together. Details here.

Top blokes from local doom unit Bleak Revelation invited us to take part in a gig they were organizing. Italian stoner/doom band Black Dio was coming around, so the Bleak crew did a decent DIY job in booking and setting a killer show. We tried to help them a bit and had loads of fun while playing the show. Most of the crowd was faces unknown to us, which was a real treat. Thanks to all involved and to every single one that came after the gig with that “mind = blown” grin on the face. This is the best feeling!

Next show is coming in a month – this time we’re bringing our friends from Calf (GR) in town. Amp worship!!! 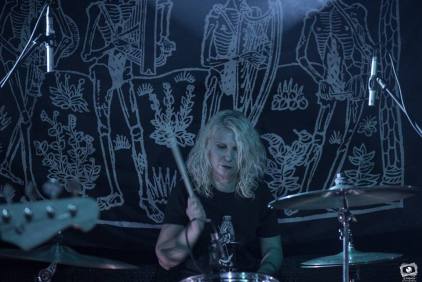 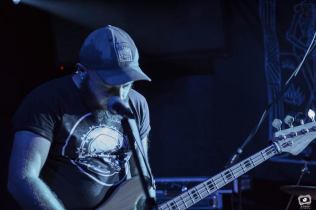 What an amazing night that was. Totally self-organized, lots of friends, free donation entry (that actually almost covered gig costs!) and most of all – killer live! Thanks to Autumn Acid, RiP, the Underground Gallery crew and every single one who came and supported this gig! DIY is awesome! 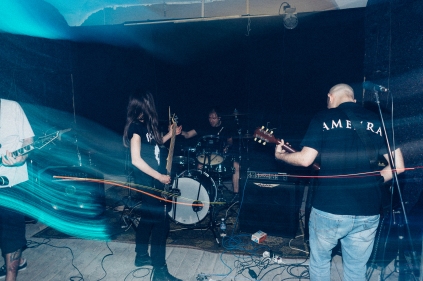 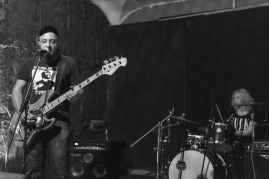 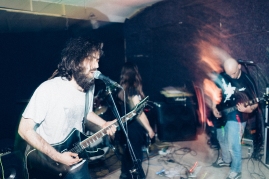 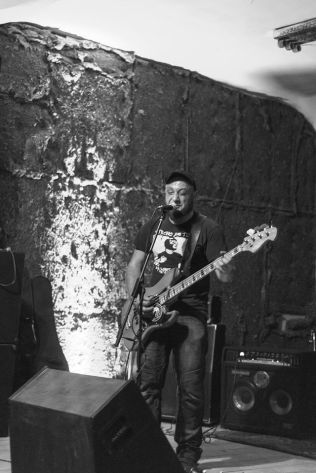 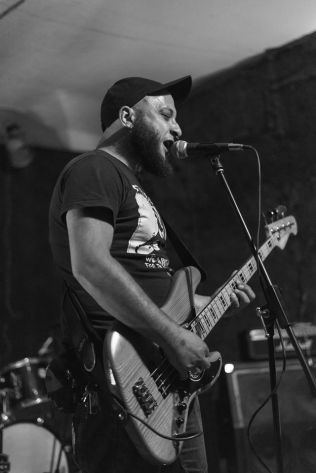 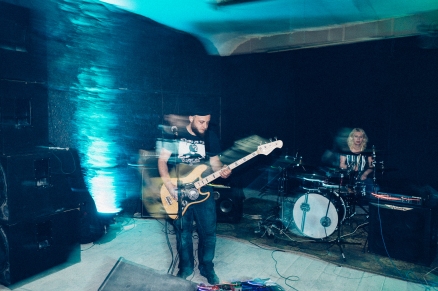 Unfortunately our gig with YÖU (MK) got cancelled due to illness of their guitar player Marko. Too bad, since we were really looking forward to this gig and playing with such a great band. Still hoping to catch up once they tour again and play “We Sing the Blues” (their rad new album that you have to check out if you’re into highly energetic and emotional Dischord-inspired melodic hardcore).

However, there was a quick fill for the date, since we got a lovely offer to play with Green Yeti and Bus the Unknown Secretary from Greece. Location was Live & Loud here in Sofia. We had some good clean fun and both these bands are fucking amazing!

We are a noise-rock duo called Feedbacker.